Out of 60 Countries, The Digital Planet 2017 report recognises New Zealand as a notable stand-out for Digital Evolution. 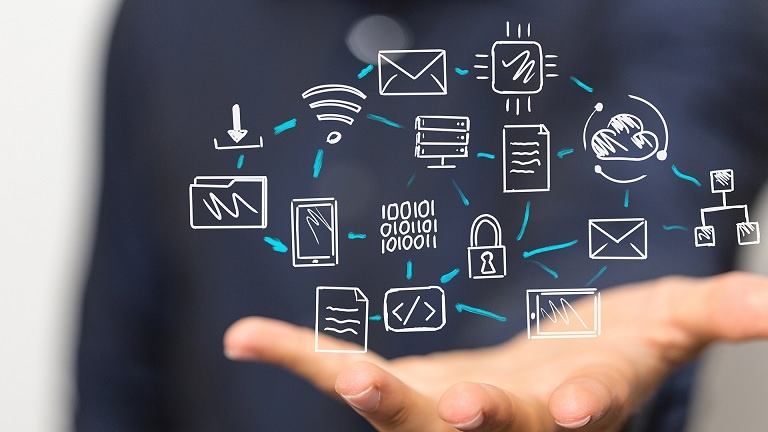 The Digital Evolution Index (DEI) is an evaluation of 60 countries, combining more than 100 different indicators to determine the level of digital capability and momentum (the speed at which technology is adopted and applied).

Ai, Cognitive Computing, Robotic Process Automation (RPA) and other technologies are fundamentally transforming operating models, and New Zealand enterprises are well positioned to reap the benefits of digital transformation. The upsides are significant from releasing value not previously obtainable to creating new demand, benefiting all participants of our economy from shareholders, to stakeholders, staff and customers.

1. New Zealand has High Levels of Digital Adoption and Momentum 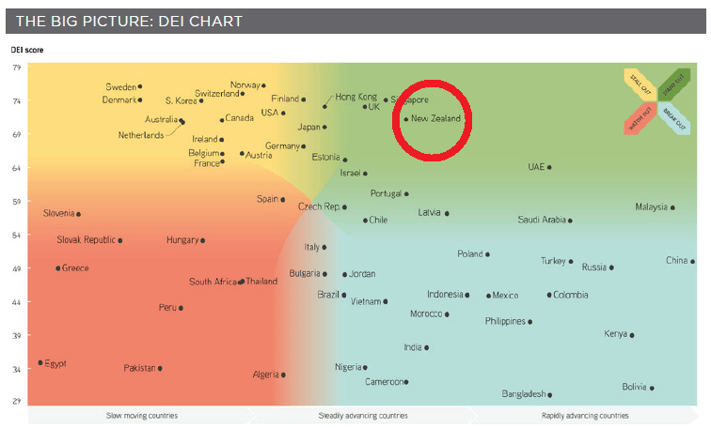 According to Digital Planet 2017, New Zealand features in the standout quadrant of the DEI. Countries in this quadrant are highly digitally advanced and exhibit high momentum. New Zealand enterprises are leaders in driving innovation creating opportunity to build on existing advantages in efficient and effective ways.

Out of 60 countries, New Zealand was ranked 14th for digital evolution behind western counterparts including the UK, USA and Australia. Concerning momentum New Zealand ranked 20th. What is significant is that all the nations which appear above New Zealand in the ranking for current evolution all fall behind New Zealand for momentum.

While we may be ranked 14th for digital evolution, the momentum is evident, and we believe this is an indicator that New Zealand organisations are ready to embrace transformation.

2. New Zealand has a ‘Trust Surplus’ for Digital Technology

New Zealand users have will have less resistance to transformative technologies relative to many global counterparts.

According to Digital Planet 2017, New Zealand has a trust surplus suggesting a strong willingness of internal users and customers to extend trust towards transformative technologies such as Robotic Process Automation.

This trust is a combination of two factors, the ecosystem created through government policy and credible suppliers and the experiences that users have within those ecosystems. New Zealand operates in a stable political environment with policies that are conducive to the advancement of technology and encourage strong levels of accountability from the suppliers who provide that technology. Because of the maturity of our ecosystem, internal users and customers are also accustomed to both using and engaging with technology reducing resistance to adoption.

New Zealand enterprises are operating in an environment that will enable the adoption of transformative technologies with relatively lower levels of resistance with faster adoption than some of our western counterparts including Australia and USA who both have trust deficits.

3. New Zealand has a Mature Digital Ecosystem Reducing the Risk of Adoption

New Zealand is ranked 17th Globally for network readiness, 10th for Infrastructure and 7th for skills.

The unique advantage that New Zealand enterprises have is that we are operating in an ecosystem with a highly evolved digital foundation that can support scale with a higher level of digital maturity that can offer lower levels of risk.

The 2017 Information and Communications Technology Report published by the Ministry of Business, Innovation and Employment states that the ICT sector in New Zealand is made up of 11,067 firms employing over 29,000 people. The report also refers to initiatives driving our thriving digital sector including Techweek, The Investor Guide to the New Zealand Technology Sector, Digital Skills Forum and accelerating the adoption of Internet of Things IoT and transformative technologies such as RPA and Ai.

Equally, Bloomberg’s recent Hello World documentary shows our evolution from a so-called ‘number eight wire’ culture to a maturing industry at the forefront of innovation.

Wrapping up, as a country New Zealand is presently a highly evolved environment regarding digital and technological adoption, and we are maintaining a high rate of momentum for ongoing adoption and technology-enabled innovation. We have an ‘oversupply’ of trust towards digital technology suggesting we will have relatively less resistance towards the adoption of modern technologies relative to other countries and we have a mature ecosystem with a technology supportive government, strong talent pool and credible supplier all reducing the risk of adoption for enterprises.