Over the last two weeks, we discussed Robotic Process Automation Myths and Selecting the Right Processes for RPA.

In recent commentary Professor Leslie Willcocks from the London School of Economics suggested broader reports are providing anecdotal evidence that "between 30 - 50% of initial RPA implementations are stalling, failing to scale, being abandoned or moving to other solutions."

There is no surprise organisations are excited about the potential of RPA considering the possible benefits, but to ignore or act naively towards the risks will significantly increase an organisations chance of failure.

Following research interviews with twenty enterprise organisations across the U.S., U.K, Europe and Africas the London School of Economics identified forty key risks which were organised into eight over-arching risk categories or groups. In this blog, we touch on what we believe are the five risks most commonly encountered but we also discuss the risk categories in full detail in our guide to early-stage planning and preparation. 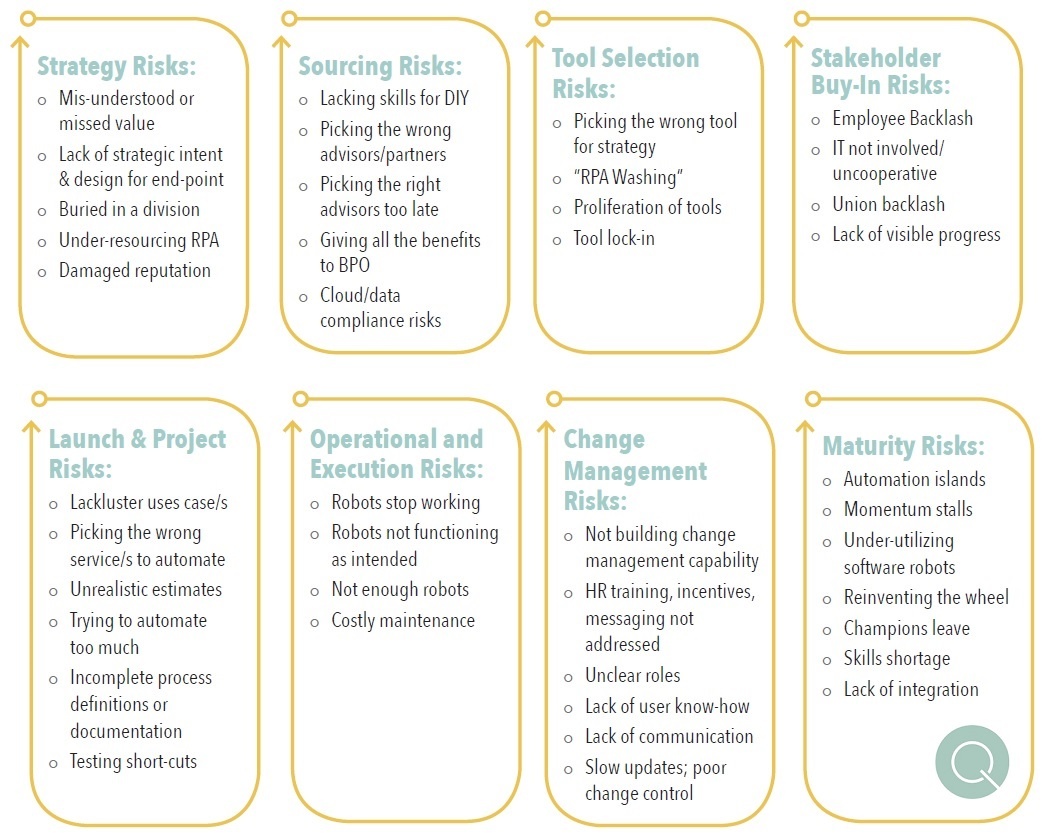 Robotic Process Automation is a strategic capability, not a tactical solution.

Failure to ensure this doesn’t mean that an RPA programme will not create benefit, but it does increase the risk that the benefit realised will not deliver value to the organisation.

This notion is extended in a concept referred to as the ‘triple win’, proposed by Willcocks and Lacity from the London School of Economics where they suggest that when aligned fully with organisational strategy, Robotic Process Automation (RPA) will deliver holistic benefit to shareholders, customers and employees.

Strategy risks also reflect a broader category. All can lead to any of the potential risks arising including under-resourcing of the programme and failure of the programme to deliver business value. Extreme cases, mainly if an organisation chose to view RPA as a tool to reduce headcount, could result in reputational damage to an organisation or detrimental impacts on organisational culture and trust.

2.0 Failure to Design for the Future State

Given that RPA is a new capability, it can sometimes be hard to see how large the programme might grow within a given organisation.

RPA is an enterprise capability. Overseas we are now seeing organisations with virtual workforces of over 300 software robots.

Invariable organisations start with small and low scale programmes as they establish capability. The advice, however, is to design a programme based on the potential scale that could be achieved and not the scale that the programme will start at or reach in the first year.

The initial scale must always be considered, but when the potential future scale is considered, this can lead to a range of different parameters that a solution must meet to support centralised control, scalability and governance.

Failure to consider these parameters and plan for them early will result in limitations that prevent or at the very least impede scalability as the programme attempts to scale.

Analysis completed by the London School of Economics estimates that 25% of problems in RPA programmes stem from tool selection.

In a recent blog post, Professor Leslie Willcocks also shares an observation that not all RPA offerings are the same stating “The capability of RPA software depends greatly on the workings and orientations of the supplier.”

Because the capability is so new, the current level of hype and ‘whitewashing’ marketing efforts by technology providers it can sometimes be hard to determine the differences between technologies. To provide an example, Forester Wave recently reviewed “the 12 providers who matter most” based on a range of criteria.

4.0 Selecting the Wrong Processes to Automate

Also addressed in Robotic Process Automation Myths, not all processes can be automated.

Selecting the wrong processes to automate can only lead to a few possible scenarios which ultimately result in failed automation, failure to realise a benefit and return value to the organisation or the erosion of benefit that may have existed.

Potentially the most significant risk that many organisations often fail to consider is that Robotic Process Automation (RPA) is not a tactical action or a project, it is an organisational capability which drives transformative change.

Change can have a positive or an adverse effect on people, the outcome of which has a direct impact on an RPA programme and its relative benefit to the business.

The risk is less prevalent for organisations intentionally taking a slow and conservative approach to automation. The determinant to a degree, therefore, is how aggressive an organisation wants to be with scalability and return on investment.

Our experience is that New Zealand organisations are taking a balanced approach here, to a point. The commercial reality dictates that at some time an RPA programme will be pushed forward to deliver the benefits that have been paid for.

With myths such as “robots will steal my job” and dependencies on engagement from subject matter experts for success, it is not enough to have a clear strategy with top-down stakeholder buy-in.

A traditional view of change management is the alignment of technology, process and people. These are all significant considerations to be addressed through effective change management and will also be one of the critical determinants regarding the level of engagement the people of the business have with the programme and its hindrance or success.

Referring to Willcocks and Lacity’s model organisations who embark on an RPA journey will face 42 risks in eight broad categories.

We have discussed five of the most common risks: strategic intent, tool selection, programme design, process selection and change management which we believe will face organisations in the early stages of programme assessment or establishment.

Two key points to consider. First, while there is a wide range of risks, they reflect the entire lifecycle of an RPA journey. However, we would point out that the highest level of risks is present in the planning and implementation stages of the lifecycle.

Secondly, and perhaps, more importantly, none of these risks is such that they can’t be overcome, but the solution is robust planning, an elevated level of foresight and a high-level of awareness around the organisations RPA programme. 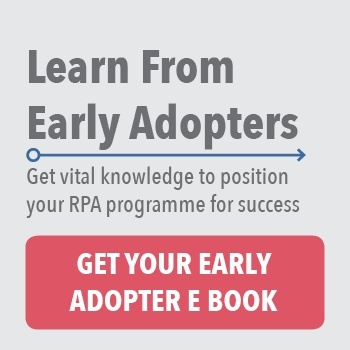